If you want to get rid of both pantry and wardrobe moths, you can take a look at Safer moth trap products. Safer is a brand that produces a lot of eco-friendly products for dealing with insects and other infestations. Here’s what to expect from their products.

Moths may be the most irritating flies that you can find in your house. Unfortunately, they don’t go anywhere unless you clean the source of the infestation, and their populations multiply faster than rabbits.

Not to mention, if they find a place like a pantry to breed inside, you’ll have to do a lot of work to get them out. In the end, it’s an enclosed space that’s full of food. What more could they ask for?

Some moths also breed in wardrobes and keep sticking to your clothes. We don’t know which is worse, but we’d take a wild guess and say that the pantry moths are certainly worse to deal with.

The Safer brand moth traps are among the most efficient moth traps on the market. They come in a recyclable cardboard box without a hint of plastic, so you’re sure you’re not hurting the environment. The layout is minimalistic and straightforward, and the package has instructions written on the outside.

When you open the box, you’ll see the traps folded into little triangle shapes. The traps, too, are made of cardboard, but they have a sticky layer on the inside to catch the moths.

Aside from the traps, you’ll also find a small red square in a tiny plastic bag. This is the time-release pheromone that works on attracting the moths to the traps. All you have to do is place the red square inside the trap; you’ll find a dedicated hole for that. Then, place the triangular web inside your pantry; its design is ideal for placing it in the corners to catch tricky moths. 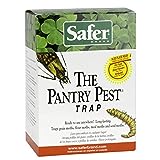 It depends on your usage. If you use them correctly, they’ll definitely be effective. Just make sure you put them in an appropriate place and only place one or two traps in the whole pantry. If you put too many traps, they’ll be ineffective because the moths will be able to avoid them.

Safer pantry traps are designed to work for up to 400 square feet, so the traps will work no matter how large your pantry is. On top of that, they work for up to three months, so you won’t have to revisit the pantry and replace them except a few times each year.

When Should You Use Safer Moth Trap Pantry Traps?

You may notice a couple of moths in your kitchen and don’t pay much attention to the issue. In the end, they’ll go away on their own, right?

Generally, you have to use Safer pantry moths once you notice any hints of an infestation in your kitchen. For example, you may see larvae or moths flying near the pantry. Or, you may see pieces of cereal or grains clumped together. These are caused mainly by webbing, which is a larval secretion.

Whenever you see any of these signs, start using Safer pantry moths immediately.

The main idea of Safer pantry traps is pheromones, which are natural hormones that female moths produce. You get a small red square that releases pheromones and attracts the moths. Only moths can smell these pheromones, so they’re safe for humans and pets.

Generally, Safer pantry traps are non-toxic, and they don’t contain any pesticides. So, they’re safe to use around food, and they won’t hurt your pets.

It’s worth noting that you should keep them out of pets’ and children’s reach, though, to avoid any tampering that may occur. We all know how curious kids can get.

Does a Safer Pantry Moth Trap Work for All Pests?

The reason is that Safer pantry traps work by releasing pheromones. The pheromones are only smelt by moths and not all species. So, other moths and flies won’t even receive the smell, so they won’t attract them to the trap in the first place.

The traps may work for other pests that live in the pantry if they happen to go into the triangular sticky trap. But the pheromones won’t attract them.

How About a Safer Moth Trap for Clothes?

Safer clothes moth alerts work in a pretty similar way to pantry traps. They, too, emit potent pheromones to attract moths. When the moths are attracted and get close to the triangular trap, they catch on to the sticky layer. Then, when the traps are full of moths, you can take them out and replace them.

Safer clothes moth alerts can last up to 12 weeks, so you won’t have to replace them as frequently as you think. It’s worth noting, though, that they only catch adult moths. Larvae won’t get caught on the sticky material.

Generally, Safer clothes moth alerts are handy for moth infestations in wardrobes. Moths and clothes aren’t a pleasant combo. If they’re inside the closet long enough, they may start poking holes through your clothes and ruining them.

Whenever you notice moths flying near your wardrobe, you should immediately put traps to get rid of them.

How to Use Safer Clothes Moth Alerts 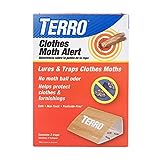 While pantry traps can be put in corners, clothes moth alerts don’t work in the same way. Instead, it would be best if you hung them at eye level in your wardrobe or closet. You can also hang them in your room if that’s where the moths are.

When choosing a place to hang them, bear in mind to keep them away from any clothes made of animal hair, such as cashmere or wool. The sticky layer can easily ruin the clothes to no return.

Additionally, you should use only one trap for the wardrobe, or two for the whole room if it’s large enough. If you hang too many traps, the moths will get confused at the smell, and there’s a high chance they won’t get caught in the traps.

After you hang the traps, wait for about 12 weeks to collect them or replace them. Or, you can just replace them when they’re full of moths. This may happen in a shorter period if you have a severe infestation. 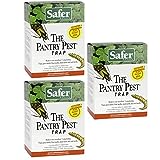 Whether you have pantry moths or clothes moths, Safer brand products are here for the aid. They’re highly effective, and they don’t contain any pesticides or toxic materials, giving them leverage over other products on the market.

Plus, both pantry moth traps and clothes alerts are budget-friendly. This way, you don’t have to break the bank trying to get rid of moths.