Do pheromone traps work on clothes moths? This is a question that many people have been asking lately. Clothing moth infestations can be a real problem, and often result in ruined clothes and furniture. Pheromone traps are a popular way to get rid of these pests, but do they actually work?

In this blog post, we will take a closer look at pheromone traps and see if they are an effective way to get rid of clothes moths.

What Are Insect Pheromones?

Pheromones are chemicals that insects put out as their main way of talking to each other. Bugs live in a world full of smells. They use smells to guide their social behavior, such as finding a mate, courting, mating, laying eggs, looking for food, and protecting the colony.

Pheromones are chemicals that insects and other living things put out into the environment to talk to other members of their own family. These pheromones are either single compounds or mixtures of compounds (often alcohols and aldehydes)

Pheromone Traps Are All The Rage These Days – But Do They Actually Work On Clothes Moths?

Pheromone traps work by releasing a synthetic copy of the moth’s sex pheromone into the air, which attracts male moths looking for a mate. The trap then contains the moth, preventing it from reproducing and spreading its damaging larvae around your closet.

While pheromone traps can be effective at reducing the population of clothes moths in your home, they won’t completely eliminate them. That’s because clothes moths can travel long distances in search of a mate, so even if there are no males left in your immediate vicinity, a female moth could still find her way into your home.

Pheromone traps are just one tool in the battle against clothes moths – to completely rid your home of these pesky critters, you’ll need to take a multi-pronged approach that includes regular cleaning and vacuuming, storage in airtight containers, and regular inspection of your clothing for signs of infestation.

The way pheromones work is very different for each species. Before you use it to lure insects, you need to know what kind of bugs they are.

In chemistry labs, pheromones are found and made, and then they are put into a delivery device, or lure. Different kinds of these devicludees inc rubber septa, hollow fibers, flakes, tape, laminated plastics, membranes over reservoirs, and polyethylene vials with acetate beads.

It should be released into the environment in a way that is similar to how and how much the target insects do it naturally. Different loads and release rates cause lures to work for different amounts of time and at different distances.

With a controlled-release lure, the pheromone can be released in a small enough amount to lure the pest into the trap, but in a strong enough amount to reach out and pull it in from a useful distance away. 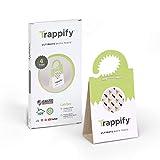 Other Benefits Of Using Pheromone Lures?

Pheromone Trap Is An Important Part Of Pest Management Plans

Pheromone baited traps they help track, through a pheromone trap data different insects and pet populations thriving in a certain area. The sticky trap catches different pest species and allows experts to identify, and find insect populations so that control measures can be used effectively.

Insects 0r pests that have found good places to hide and food in collection areas might not be caught by “blunder” insect attractants traps. This is because they have little reason to move. When used correctly, pheromone lures can make monitoring much more effective.

These pheromone lures are very sensitive and may be able to catch pest insects that are too few for other inspection methods to find with a reasonable amount of work. This quality can be very important when the goal of a sampling program is to find foreign or “exotic” pests as soon as they arrive in an area so that control measures can be taken right away.

Pheromones Trap catches one species or a small group of species only. Sex pheromones trap only their target pests or target insect. This trapping makes it easier to determine and count the pests you want to control.

Attractant-baited traps work well and save time because they are sensitive and species specific. Office of Agricultural Entomology, University of Illinois at Urbana-Champaign. “Alternatives in Insect Management.”

Captured moths on sticky surface Traps won’t be able to reproduce. Apart from that male moths that are baited with pheromones are useful because they can help detect the source of an infestation in a large storage facilities.

Monitoring of traps should be conducted to determine the number of insect species they catch. Moreover, place traps in places where they can lure most pest.

Risks That Could Come From Using Pheromone Lures

Sex pheromones that smell like the female insect will never attract a males of other species, mating pair, the harmful larvae stage, or egg laying females . This avoids cross contamination.

Most of the time, someone from an outside grid pattern you are watching won’t be attracted since pheromone lures aren’t strong enough to attract males .

By using the tips below, you can use pheromone traps to detect and find the source of damaging insect pests. This process helps in monitoring the presence of males, egg laying females in their larvae stage.

This monitoring will stop any unwanted insects from getting into a storage or exhibit space. Pheromone traps only work for one type of pest, so they won’t catch other kinds of bugs.

Leave pheromone “caps” (lures) in their sealed packages for one day before using them at home. Buy only pheromone mixtures specific to clothes moths.

Use only a small amount of this because insects such as clothes moths can smell very small amounts of pheromones. Wear disposable gloves when handling pheromone lures or any other pheromone product to keep it from getting on other products. 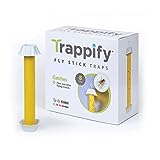 Setting Up At Home

Before putting lures in traps, they should be hung. Set the traps at least 40m apart, and if you’re trying to catch more than one kind of insect, use different traps for each lure and keep them at least 40m away from traps for other species. For each type of insect you want to watch, a line of five traps in your orchard or vineyard should be enough.

You should also put labels on your traps, especially if you are looking for different kinds of pest at the same site. You should never use more than one kind of lure in a trap. Instead, you should use a different trap for each type of insect you want to catch.

Change traps when they get full of dirt. Also when other bugs, or bits of leaves, or when they sag from being wet for too long. When a lot of midges come out at once near big lakes, the sticky surface gets full, but cleaning them all off would get rid of all the sticky stuff anyway.

The pheromone lure should be moved to the new trap. Lures last for different amounts of time. If the package doesn’t say how long they should last, assume they should be replaced after about 6 weeks.

Pheromone lures don’t last the whole season. Between generations of the pest being watched, try to change the lures. Before putting the lures in the traps, it’s best to let them sit out of the package for a day or two.

This is because lures tend to release a lot of pheromones when the package is first opened. This can cause an unusually high number of moths to be caught, which makes it hard to figure out what the data means.

Which Chemical Is In The Pheromone Lures?

The substance used in insect pheromones is a synthetic version of the sex chemical attractants that many species of insects use to communicate with each other. These hormones are sex pheromones.

The most common sex pheromone is a mixture of Sordidin. It synthesize chemically with Isoamyle acetate.

The information below is the results of the monitoring program conducted At the University of Kentucky Research and Education Center in Princeton, KY, to determine the exact time, date to set up the traps for different species of moths. When you set traps at this time, they should be ready before the first flight. 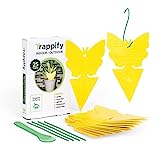 Set the trap on March 1

You can identify Beet Armyworm Moths by their uniform pale brown or brownish-grey color and their wingspan of 1-1/2 inches. One small white dot in the middle of each front wing that stands out.

Set the delta trap on May 1

You can identify European Corn Borer Moths by their yellowish brown color and dark olive-brown bands that run in wavy lines across their wings. These moths have very sharp points that make them look like a delta-winged plane. The moth’s wings are about 1 inch across.

Set the pheromone trap on June 1

You can identify moths by the size of their wings, which are about 1-1/2 inches across. The back pair of wings are grayish white. While the front pair are dark gray with lighter and darker spots. It also has a white spot near the end of the wing. When they rest, they hold their wings over them like a tent.

Beet armyworms could lead to confusion. BAW isn’t as big as FAW.

The moth’s wings are about 1 1/2 inches wide. The front wings are light green with four oblique light bands that cross each other. The inner three of these bands have black edges.

Corn earworms could lead to confusion. Usually, earworms are bigger. 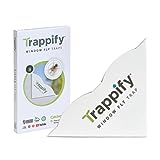 Identify moths through their dark forewings with lighter spots and thin white scales on the back wings.

Fall armyworm could lead to confusion.

Pheromone moth traps work by releasing a pheromone, which is a scent that attracts moths. The pheromone in the air and lure the male moths into the trap. Once the moth enters the trap, it is unable to escape and will eventually die.