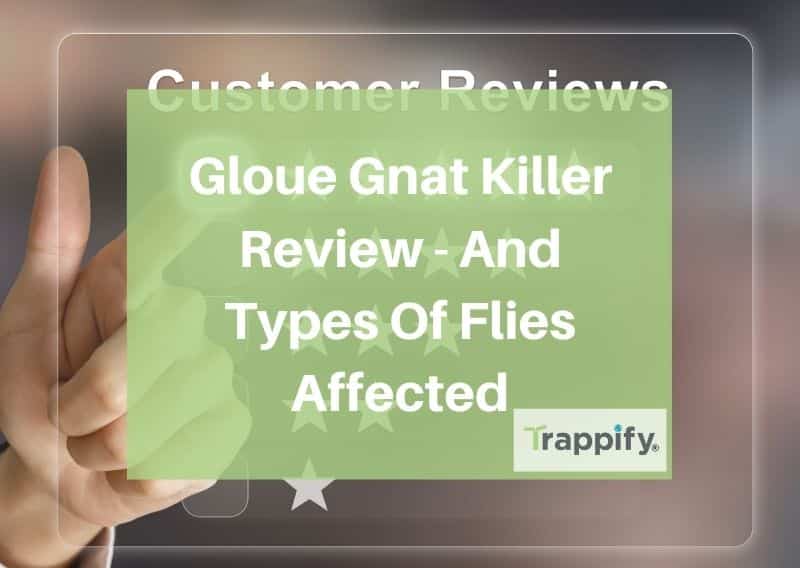 Gloue Gnat Killer Review: Are They Worth It?  We’ve all been there. Whether you overlooked a sugary spill or forgot to take the trash out, gnats will multiply and cause a serious infestation before you know it. I don’t know about you, but I don’t usually entrust chemical sprays for this mission. I always consider bug zappers to be a safer option for my kids.

If you agree with me, I think you’ll love Gloue’s products. They are well known for being effective without breaking the bank. In this article, you’ll find Gloue gnat killer review to figure out which one is more suitable for your needs.

With a maximum range of 16 feet, the Gloue’s Electronic insect killer is their best-selling model. 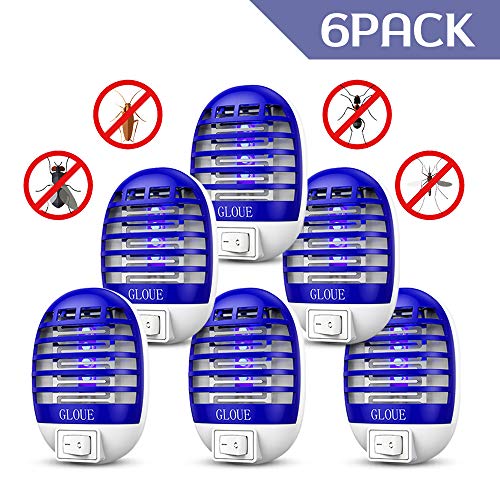 This gnat killer comes as a small oval unit that measures 2.5” in width and 4” in length. Its operation couldn’t be simpler. All you have to do is plug it to the wall via the flat double-prong plug found on the back.

In the innermost part of the unit, Gloue placed 4 high-intensity light bulbs that can effectively attract gnats and other bugs. As soon as they approach the light, the high-voltage metal plate placed on top will instantly electrocute them.

To protect your kids and pets, the eclectic plate is shielded with a violet plastic cover. The spaces between the cover bars are small enough to block fingers, yet spacious enough to lure gnats.

Thanks to the convenient on/off switch placed at the front, you can easily turn off the device without having to plug it off the wall outlet.

Electrocuted gnats and bugs will collect over the metal plate. If you’re suffering from a dense infestation, you’ll have to clean it on a daily basis.

Luckily, the cleaning process is fairly simple. Before you start, Gloue suggests touching the metal place with a screwdriver to discharge any static electricity that might be lurking inside.

Then, the protective cover can pop out of place by applying light pressure in any of its corners. The dead gnats can be wiped with paper towels or a small brush. You can also unscrew the metal plate to remove any insects that might have fallen onto the light bulbs.

With proper tools, this process shouldn’t take more than 2-3 minutes, which adds a lot to the unit’s convenience.

Customer reviews were rather dissonant. Some were satisfied with how it rapidly eliminated dozens of gnats. Others said it didn’t even zap a single bug.

To be fair, I think your experience will boil down to how well you place this unit. For the best result, Gloue recommends distributing more than 6 units all over your house. This will enlarge the effective range, making sure the gnats are successfully lured to their demise.

Do you like versatile appliances? If so, you should love this 2-in-1 lamp and bug zapper! 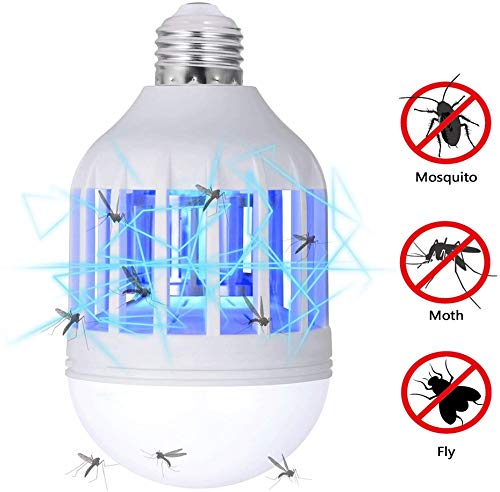 As the name implies, Gloue designed this model to look like a normal LED bulb. Yes, it’s a bit bulkier than average, but it can still blend in perfectly inside most homes.

On the top, this unit has the same opaque white glass that you can typically find in any light bulb. This part emits 1200 lumens with a color temperature of 6500K. According to Gloue, the unit should seamlessly work for an average of 50,000 hours.

As you go down, you’ll see a sturdy plastic cover that keeps your curious kids’ hands protected from electrical parts.

At the innermost part, Gloue placed another bulb that generates light with a wavelength between 365 and 420nm. Since this range extends a bit beyond the visible range, some of the rays belong to the ultraviolet category. This guarantees higher insect attraction within wider spaces.

And surely, the unsuspecting gnats will face their demise after they touch the metal plate that encircles the inner bulb.

To use this gnat zapper, you’ll have to plug it into one of your 110V light sockets. You can flip through its three modes by simply flicking the light switch.

After plugging the device, both of its light bulbs will be turned on by default. Next, if you turn the switch off and on again, only the bug zapping light will turn on. This ingenious operation allows you to enjoy a bug-free environment while you’re awake and as you sleep.

The third mode turns the main light back again, but with a lower intensity. This should be ideal if you’re just chilling in front of the TV after a long workday.

Folks who like to set-and-forget will love this unit. Gnats that are successfully electrocuted won’t be trapped inside the unit. Instead, they’ll slide above the 45-degree platform situated below the electrical plate.

On the downside, the gnats and other insects will drop over the floor. Things will get quite messy if you stepped over them by mistake. Then again, sweeping the dead insects away is way easier than having to disassemble the whole unit.

“What about the insects that adhere to the metal plate,” you might ask? Extending a small brush in between the cover’s bars should get the job done with relative ease. But make sure you completely unplug the unit beforehand. And just like the previous model, touch the metal plate with a screwdriver to absorb any static charges.

Most reviews were generally satisfied with the overall performance. They said the light was bright enough to cover a wide area. And the voltage flowing through the metal plate was sufficient to eradicate large insects.

However, some reviews criticized the shipping and quality assurance. Unfortunately, some customers received disassembled products, faulty models, and broken shipments.

Did you like the previous model? If so, you should also consider this 2-in-1 device. 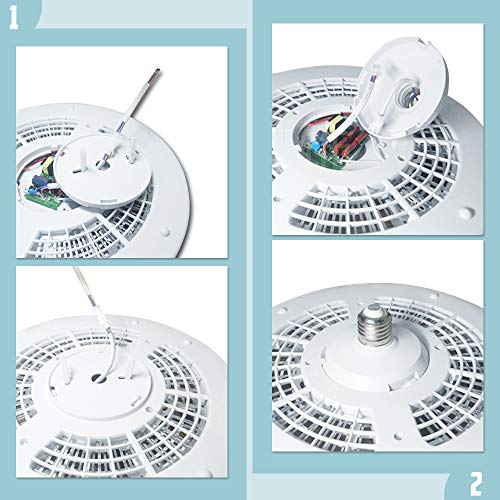 This model functions as a light bulb and a bug zapper, just like the previous one. But instead of having one bulb, this one has two: a reflector and a circline. And of course, the reflector lies in the middle, leaving the circline on the border.

Between both bulbs, Gloue placed a circular high-voltage metal grate that chars gnats and large bugs with relative ease. And if the bright LED light wasn’t enough, insects will be lured inside by the small blue bulbs scattered around this grate.

Just like the previous devices, the electrical parts are shielded with a plastic cover to prevent accidental touch.

The operation modes featured here are quite similar to the previous product. When you flick the switch the first time, the white bulbs will illuminate. With the next flick, the device will work as a bug zapper only. The third and last flick will turn on the lamps and the zapper grate.

The thing I like the most about this device is how easy its maintenance is. First of all, the dead insects that don’t adhere to the metal grate will instantly drop to the ground. All you have to do is sweep the loads of gnats at the end of each day.

To guarantee a flawless experience, Gloue recommends cleaning the metal grate every now and then. And don’t worry, you won’t have to disassemble the unit at all. Flushing it with a hairdryer will do. If the insects seem to be stubborn, you can use the small brush that comes with the device to quickly remove them.

Reviews came out rather positive about this model. In fact, between the rest of Gloue’s products, this one received the fewest negative comments.

The only major feedback spoke about the general application rather than a particular downside. With nothing to catch the dead insects, this model won’t be suitable for bedrooms, kitchen, and any other place where you can’t just sweep the dead bugs off the ground.

And of course, there are a bunch of comments complaining about faulty deliveries. But Gloue’s customer service made up for these incidences with quick, considerate action.

After revising the Gloue gnat killer reviews, I can say that the Gloue Electronic Unittops the list as the most sought-after product. Its simple operation, easy maintenance, and economical price are simply unbeatable.

Folks who value versatility will love the GLOUE Light Bulb Bug Zapper. You can turn on the zapper and the lamp together, or suffice with the zapper alone during sleep.

GLOUE Circline Light Bulb Bug Zapperis the third and last model. It works in a way similar to the previous one, but it features 2 bulbs with a larger metal grate. That makes it more suitable for large spaces in schools, hospitals, patios, etc.

Here at Trappify we want all of our customers to be informed, but we do highly recommend the Trappify Gnat traps – Pesticide free and non-toxic.  –  CLICK HERE To See On AMAZON

Now go on and teach those gnats a lesson!