No one likes the musty scent of mothballs, especially when it permeates an entire house! It’s one thing to catch a whiff of it in your closet, but in older homes, especially, the smell can be overpowering.

And once it’s there, it’s hard to get it out! The scent seems to stick to walls, furniture, and soft surfaces even after the mothballs are gone.

Where Do Mothball Smells Come From?

Mothball smells traditionally come from a chemical called naphthalene. We typically obtain naphthalene from petroleum distillation, but it’s in a number of plant oils as well. When someone burns tobacco in a cigar or cigarette, naphthalene is present. Naphthalene is also in car exhaust fumes and even forest fire smoke.

Naphthalene is toxic to humans and animals in large amounts and is thought to be cancer-promoting. However, it’s also very good at keeping moths away from linen and clothing.

If the mothball smell in your home isn’t coming from naphthalene, it’s probably coming from another chemical called paradichlorobenzene. Paradichlorobenzene is in many insecticides and some types of mothballs. It’s great for repelling moths, insects, and even rats, but it’s also toxic to humans and pets in large amounts.

Besides being toxic, naphthalene and paradichlorobenzene stink! And, the odor they release is sticky, to say the least. It can get into wood, carpets, and any other soft surface in your home, including curtains, linens, and clothing. And once it’s there, it can be tricky to get out even after the mothballs are gone.

Mothballs don’t disappear instantly, either. A single mothball takes 3-6 months to dissipate if it’s left in the open air. More often than not, though, mothballs are placed in closets or drawers. Shut away in a small space, a mothball can take a year to dissipate, and the smell will linger for far longer.

How To Get Rid of Mothball Smell in the House

Luckily, there are a few things you can do to get rid of mothball smells without introducing more toxic chemicals into your home. In fact, you probably have most of what you need to get rid of the stench in your pantry already! 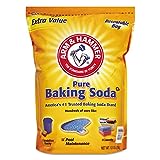 Baking soda is amphoteric, meaning it’s able to react as both a base and an acid. Though it’s technically a weak base, baking soda will react with both acidic and alkaline materials. When it reacts with them, it turns them into neutral salts, effectively eliminating scents. That means baking soda is great for getting rid of scents of all types, including mothball odors.

You could simply pour some into a bowl and set it somewhere in your house. But, for maximum results, try dissolving a few tablespoons of baking soda in warm water. Then, use the water and baking soda solution to wipe down any wood surfaces in your home, including the floors and even the walls.

There are plenty of other natural odor absorbers you could place out in a dish in your home. All of the following help absorb offending odors:

Use an Air Filter 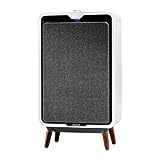 If you notice the mothball scent has worked its way into wood surfaces and furniture, you might want to try zeolite. Zeolite is a natural volcanic mineral that you’ll find in all sorts of household items like laundry detergent and cat litter.

Sort of like an air filter, zeolite attracts the ions responsible for odor. In other words, it can absorb foul mothball smells.

You can purchase zeolite in its raw form, but if you have cat litter on hand, it will work just as well. Pour it over wood surfaces or furniture and give it a few hours to work its magic.

Maybe the easiest way to get rid of a lingering mothball scent is to ventilate. It might not work for the most pungent odors, but it can make a big difference.

Open windows and doors where you can, and run a ceiling or freestanding fans. Getting the air moving will help get rid of the mothball scent.

Of course, in the most extreme cases, none of the above methods may prove entirely effective. In some cases, the only way to get rid of the scent is to recarpet and replace soft materials. In the meantime, air fresheners and candles might help, but note they’re only covering the scent, not getting rid of it.

How to Get Rid of Mothball Smell – Alternatives

Getting rid of mothball odors can be challenging, so once you manage it, you’ll want to look into mothball alternatives. Otherwise, you’ll be in the same foul-smelling spot a few months down the line.

Luckily, there are several alternatives to naphthalene and paradichlorobenzene that repel moths and moth larvae. As an added bonus, they’re also non-toxic for humans and pets.

How to Get Rid of Mothball Smell – Final Thoughts

Mothball odors aren’t pleasant, and they come from harmful substances. Luckily, now you know how to get rid of mothball smell, and it’s possible using odor absorbers, ventilation, and air filters in most cases.

Once the scent is gone, it’s a good idea to seek out mothball alternatives. Otherwise, you’ll just find yourself in the same mess a few months down the road.

Cedar chips, pheromone traps, and vacuum-sealing soft materials can all keep moths away without harmful chemicals. Using them will ensure you never have to deal with foul-smelling mothballs while still protecting your clothes!