We’ve all been there. You’re in the middle of cooking dinner and you see a fruit fly buzzing around your kitchen. Or maybe you’re sitting outside on a nice day and you get swarmed by gnats. Fruit fly vs gnat? Which one is worse?

Fruit flies and gnats are both tiny, winged insects. They both are attracted to overripe fruit and other sweet substances. Gnats come in all forms and shapes. One of these gnats is the fungus gnats.

Once gnats and fruit flies have managed to enter a building, you may want to remove them. They are similar in terms of their physical appearance. Both appear suddenly and originate from diverse places. Fruit flies, for example, enter a home while embedded in fruits and veggies, whereas gnats may be found in potted plants.

Fungus gnats and fruit flies are similar in appearance, but gnat swarms are often more obvious. When a lot of food is available, such as a fruit bowl, gnats prefer to congregate rather than fly about alone.

A fruit fly might be small, but it can reproduce quickly, which makes it such a nuisance. Fruit flies lay eggs on rotting produce and even in a garbage disposal.

A female fly can lay up to 500 eggs in her lifetime, and those eggs hatch within just a few days. That means that if you have one fruit fly in your home, chances are there are hundreds more just waiting to hatch.

A fungus gnat, on the other hand, is attracted to anything sweet or rotting, which means they’re often found near fruit, garbage, or even your kitchen sink. While they don’t reproduce as quickly as fruit flies, they can still lay up to 300 eggs in their lifetime.

You might be fooled into thinking that fruit flies and gnats are similar, but they come from different families. Fruit flies belong to the Drosophilidae family, whereas gnats are found in various families including Sciaride, Anisopodidae, and Mycetophilidae.

The fruit fly and gnat are not only different species, but they are also unrelated. This implies that insects like fruit flies, fungus gnats, and other types of insects like drain flies and bed bugs, have distinct habits, actions, and preferences.

It’s critical to identify insects to avoid infestations and take preventative measures. However, you need to learn how to tell them apart since these pests can affect various areas in your home, and they also have different origins.

One way to tell these tiny flies apart is by looking at their legs. If the insect has long, spindly legs, it’s likely a gnat. On the other hand, if its legs are stubbier, it’s probably a fruit fly.

Typically, fruit flies create a round silhouette, which is quite similar to your house fly. On the other hand, gnats have dangling legs and lengthy bodies, giving them the appearance of a little mosquito.

Although they are very tiny, fruit flies are bigger than soil gnats. An adult fly is comparable in size to a sesame seed, whereas an adult gnat can be twice as big. It is hard, however, to distinguish between them because they are both small flying insects that look like flies.

By Their Wings and Antennae

With fruit flies, the dominant V allele has long wings while the less dominant counterpart has vestigial ones. Fruit flies have shorter antennae than gnats.

The larvae stage is another way to tell these insects apart. Fly larvae look like small, white worms. Gnat larvae, on the other hand, are clear and have black heads.

Typically, fruit flies would lay their eggs in sweet food like fruits. Once the larvae hatch, they eat their way out of the fruit and then fly away.

Gnats lay their eggs in damp soil near a water source. The larvae live in the soil and feed on organic material. This is why you’d often find gnat infestations in soil and plants.

The colors of gnats and fruit flies are quite similar. They both have brown, black, yellow, brown-yellow, and brown-black hues, although gnats seem to be more colorful.

By Where They Are Found: Rotting Fruit and Moist Soil

Gnats do not feed on fruit. Instead, they feed on the fungus that grows in damp soils. Gnats aren’t great fliers; you may see them resting or crawling around potted plants or other locations.

On the other hand, you would find fruit flies in bars, restaurants, and even homes. They like to hang out where fruits or veggies are kept. They feed on fruits, such as apples, pears, and bananas, so keep an eye out for them when you bring these fruits into your home from the garden.

Can Fruit Flies Make You Sick?

While fruit flies and fungus gnats may not be the most dangerous pests, they can still pose a risk to your health. Both insects are known to carry disease-causing bacteria.

There is no disease specific to fruit flies, whether it’s due to consuming something that has been contaminated by them or even inadvertently ingesting a fly. Spoiled food causes people to become ill.

It isn’t because of fruit flies; rather, it is due to a variety of factors. There is no medical therapy available for these insects. They don’t transmit malaria or painful bites, and they aren’t associated with any life-threatening illnesses, but they are still considered a health risk.

Imagine a cloud of flies gathering around a garbage can before dining on your food. Of course, they’ll bring germs with them when they come and sit on your meal.

Can Fungus Gnats Make You Sick?

When it comes to fruit flies, most people think of them as a nuisance. They’re attracted to fruit and often end up in your kitchen or bathroom. While they’re not known to transmit disease, they can carry bacteria on their bodies which can contaminate food.

Fungus gnats are little nuisances since they do not cause significant property damage. However, gnats can be quite harmful to human health if they transport germs from filthy breeding sites. Residents must eliminate possible breeding and development spots since gnat females can multiply and create an unclean environment.

A swarm of bugs buzzing over a houseplant is most likely fungus gnats. They breed inside pots, often laying eggs in moist soil to protect themselves as they develop. These gnats can seriously damage the root structure of your potted plants before they mature into adults.

Getting Rid of Fruit Flies and Gnats

Gnats are most commonly found in potted plants or houseplants. On the other hand, fruit flies are attracted to produce because fruit emits ethylene gas, which is a ripening agent. When the fruit starts to rot, the ethylene gas levels increase, which results to fruit fly infestation.

Get Rid of Rotting Food Source

Gnats are attracted to rotting food, food spillage, moist soil, overwatered plants, decomposing foods, and even puddles. You should also make sure to keep your fruit in the fridge, as this will help slow down the ripening process and reduce ethylene gas emissions.

If you have potted plants, make sure to check for drainage holes and ensure that they are not blocked. Gnats lay their eggs in damp soil or a damp potted plant, so a well-drained potting mix is less attractive to them.

Gnats are repelled by dry soil. The top layer of potting soil should be allowed to dry out between waterings to deter gnats.

Get rid of waste, drain gunk, overflowing trash cans, overripe fruits, and other similar items. Even pet food or your unfinished half-empty wine glass can also attract flies. So proper garbage disposal is the first step to efficient pest control. This will also help prevent fruit flies and gnat infestation.

Use Fly Traps to Kill Fruit Flies and Gnats 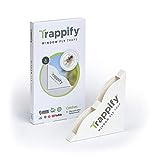 Another great way to get rid of your small flies is to get fruit fly and gnat traps that will easily rid your home of these insects. You will find amazing products that can trap those insects or prevent them from infesting your home.

You can also trap gnats to get rid of them effectively. Be sure to disrupt the life cycle of a fungus gnat larvae by setting sticky traps in your houseplant. Pull out the plant from the pot, and check for gnat eggs. Leave plants with gnats outside your home.

If you think your plants are infested, use a sticky trap to capture any adult gnats that may be present near the plant.

Fruit Fly vs Gnat: Which One is Worse?

On the surface, it may seem like fruit flies are worse because they’re bigger and more annoying. But when you take a closer look at both of these tiny pests, it’s pretty hard to decide which one is worse.

Fruit flies are attracted to fruit and often end up in your kitchen or bathroom. While they’re not known to transmit disease, they can carry bacteria on their bodies which can contaminate food.

Fungus gnats, on the other hand, are more than just a nuisance. These small flying insects are capable of making you sick. So next time you see a gnat buzzing around, be sure to swat it away!