Well, there’s been controversy regarding this topic. Here’s the 2022 market review of electronic insect repellents that do work. But first, let’s answer your questions.

Electronic insect repellers work either by producing ultrasonic sounds, or by releasing pesticide in tiny particles. However, some people were doubtful of the ultrasound repeller’s effects. They believe that ultrasonic sounds can only hurt insects when administered in some specific ways not available for commercial use.

Despite these claims being right, electronic insect repellents do work, but for a limit. They’re ideal if you want an instant effect, but they’re not too useful for long-term use because their effect only persists temporarily.

There’s also the fact that some insects eventually get used to the sound, so they stop being affected. However, that’s a long shot because insects have pretty short lives. They don’t live long enough to get used to the ultrasonic sounds.

Electronic insect repellents that don’t release ultrasonic sounds are pretty effective, though. They release tiny particles of chemicals into the air to kill any insects around. They’re also safe to be around, and they’re unscented to avoid annoying people.

Many people prefer ultrasonic repellers because they don’t harm any pets or kids around or humans in general. That’s unlike pesticides and insecticides, which are toxic, and we all know it.

There’s an agreement, though, that electronic insect repellers aren’t suitable for pest control. It may get out of hand because these repellers aren’t meant to kill pests; they’re meant to deal with insects and rodents. Plant pests are a whole other story, and they’ll likely need a good old pesticide in order to go away.

So, all in all, electronic insect repellents work, but they’re not the best option in some cases. ِAs for ultrasonic repellers, a lot of consumer reports advise against using them because there’s no scientific evidence of their efficiency.

How to Correctly Use Electronic Insect Repellers?

If you want to use electronic insect repellers, there are a couple of tips you need to know to get the most out of them. Otherwise, you won’t get the results you desire. For starters, using trapping methods alongside ultrasonic repellers increase their efficiency. Alone, they may not be enough to get rid of all insects if they’re a lot.

The ultrasonic soundwaves are supposed to get the insects or rodents to scurry away. Driving them towards traps will get rid of them faster.

Additionally, bear in mind that when it comes to rodents, their results may be temporary. Over time, they get used to the ultrasonic sounds, and it doesn’t phase them anymore. Rodents are generally smarter than insects, and they have longer lives.

Not to mention that they’re harder to get rid of. So, expect returns if you only depend on ultrasonic repellers to drive them away. You’ll want to use any other method as well.

Furthermore, it would be best if you kept your expectations low at first. It may be true that electric insect repellers work, but it’s also true that there aren’t enough scientific facts to back them up. So, they may not work, and you need to be prepared for it.

Lastly, keep in mind that the location of electronic devices is a major contributor to their efficiency. The soundwaves or the chemical substances that emit from them are pretty short-range, and they’re weaker than you expect. Any piece of furniture or a wall can easily block them, thereby compromising their effectiveness.

So, make sure to place your device smartly. You can test it out by turning off all the lights and placing it next to a lamp. The shadows and beams that appear in the lamp’s light will tell you whether it’s working or not.

The Best Electronic Insect Repellers on the Market

Now that we’ve covered the efficiency of ultrasonic repellers, we’ll review some of the best options on the market so that you can find your match. 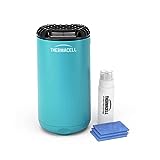 When it comes to coverage, the Thermacell repeller is hard to match. It’s perfectly capable of covering up to 15 feet, which is quite sufficient for patios and similar spaces. The repeller was, in fact, manufactured for the outdoors. That’s why it’s water-resistant, and it includes a protective cover.

What most people love about this repeller is its sleek, baby blue design that’ll look nice on any porch and inside any house. You won’t need to decorate it or try and drive eyes away from it; it already looks beautiful.

The Thermacell doesn’t cause fogging around it, contrary to other similar products. Once you turn it on, it heats up and releases chemicals into the air, thereby repelling any insects and pests around.

The repeller is lightweight, standing at less than 10 ounces, which makes it pretty easy to move around. However, that also means it’s prone to get knocked down due to harsh winds. If you have a pet, you’ll want to keep him away from the device for the same reason. 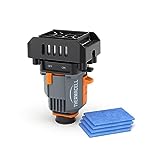 Another impeccable Thermacell device that you can use to electronically repel insects. If you’re looking for a device to take on camping or hiking trips, this may be the one for you. These trips are full of mosquitos, so it’s always better to take such a device with you.

Devices with electric powering and batteries aren’t ideal for these trips because the batteries will inevitably run out. Not to mention that there will probably be no wall outlets for you to plug the device. That’s why this device is powered by gas as its fuel.

Being gas-powered, the Thermacell repeller is typically cost-efficient. It’s also compact and lightweight to be easy to travel with and pack into bags. It stands at the height of four inches and weighs four ounces.

If you use four ounces of gas to fuel this Thermacell repeller, it’ll keep working for 90 hours, which is pretty impressive for such a small device. You can even get it to work for 360 hours straight if you get a 16-ounce gas canister.

The only downside to this Thermacell is that it covers a small area, but that’s because it runs on repellent mats. 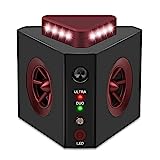 Do electronics insect repellers work? Yes, they do. Not all of them are equally efficient, but they’re pretty okay, and they may be the better alternative for spray pesticides. These pesticides and insecticides are pretty harmful to both the environment and the humans around.

Plus, you can’t keep food around when you’re spraying because the pesticide contains toxic substances. With electronic repellers, you don’t have that kind of risk.

If you’re using an ultrasonic repeller that only works with sound, you won’t be releasing any harmful substances into the air, and regular electronic repellents don’t have a significant effect.

We hope you find an effective repeller that’ll get rid of insects for you!

To view all of our all natural pest control options, CLICK HERE! 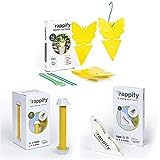