Do Dr. Killigans moth traps work? In this article, I’ll give you a comprehensive review of Dr. Killigan’s Pantry Moth Traps and Dr. Killigan’s Clothing Moth Traps. I’ll also share my personal experience of rigorously testing them for five weeks.

Moth infestations aren’t something that happens too often, but when they do, they can be a real nuisance to deal with.

Before discovering moth traps existed, I actually called a pest control company to solve a moth problem I had. It didn’t work, though, and my kitchen smelled terrible for a week. This is when I decided to look into moth traps, and I landed on Dr. Killigan’s pantry moth traps. 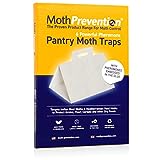 Right off the bat, you’ll find that Dr. Killigan’s traps use incredibly simple design elements. They’re made out of cardboard with openings on the side for better airflow and overall effectiveness.

They come in two color patterns, black and white for the clothing moth traps, and black and blue for the pantry moth traps. These differences are purely aesthetic and all traps work exactly the same.

25,673 Reviews
Dr. Killigan's Premium Pantry Moth Traps with Pheromones Prime | Non-Toxic Sticky Glue Trap for Food and Cupboard Moths in Your Kitchen | How to Get Rid of Moths | Organic (6, Black)
$16.97
Buy on Amazon

The traps come in 6 pairs and are labeled “Non-Toxic, Insecticides-Free, Food-Safe, and Pet-Safe.”

The best thing about them is how easy they are to install. All you have to do is unbox the trap, peel the sticky layer, and assemble it into a pyramid shape.

The pheromone that attracts the moths is found in the sticky layer, and even if you put your nose over the glue, you’ll barely smell any odor.

I was surprised to learn that Dr. Killigan’s moth traps only attract male moths. The idea is that by trapping the males, the life cycle is disrupted. Soon after the males are captured, the females die off and the remaining larvae are cleaned so no moths make a return.

Dr. Killigan’s moth traps have consistently received great ratings from many satisfied customers. The only time these moth traps won’t be effective is if you don’t actively clean the room and get rid of the remaining larvae.

Dr. Killigan’s traps state that they need you to follow a few steps in order to achieve maximum efficacy. First, you need to vacuum the entire room, as thoroughly as you can. Make sure the surfaces, corners, and shelves are properly cleaned.

It’s also recommended that you remove the shelves in your kitchen or wardrobe and clean the corners. This will help you get rid of any moth grubs that can spread the infestation.

We haven’t received any reports of users that didn’t notice an immediate difference as soon as they set up the traps. In extreme cases of infestation, some users still needed to hire a moth control company.

These are the most commonly found moths in your house, but you could be in the 1% population who’s infested by another type.

If no moth traps seem to work, you’ll probably need to hire a professional service.

At the end of the day, they’re just pheromones that stimulate a response exclusively in moths. They go unnoticed by humans and are 100% safe for everyone but moths.

Pantry moths truly love bird seeds; they need a dry place to lay their eggs. I own two canaries in my kitchen, which meant there was a constant supply of fresh seeds, which, in turn, meant that my kitchen was a favored destination by moths.

I tried calling a pest control company to take care of my problem, but I was only safe for a couple of months. The insecticide was also toxic to my birds, which meant I had to move them elsewhere. And don’t even get me started on the odor.

Thereafter, I bought three traps and set two up in the kitchen and one in the hallway.

On the first day, I replaced all my bird seeds with fresh ones that I stored in the fridge. I also made sure the pantry was emptied and thoroughly cleaned. There were close to 10 moths around the birdcage and inside the pantry. By 7 PM, the traps were set and active.The next morning, I noticed the trap had worked but nowhere as effective as I’d hoped. I counted 6 moths that were still lurking. There was no noticeable odor.

I did some research and found out that storing your traps higher or lower than the surface level usually attracts more moths. I readjusted the locations and hoped for the best.

A few hours later, things had taken a drastic turn for the moths. There was only one older moth hanging on to the ceiling. I found no juvenile moths and no odor. Also, my canaries didn’t have to relocate.

Over the next two weeks, I realized that traps left in direct sunlight didn’t attract any moths. It seems too much sunlight can make the pheromones ineffective. Also, Dr. Killigan recommends you use a 50/50 vinegar-water solution to wash the surfaces, including the floor. Maybe that’s why the results weren’t as fast as advertised.

Overall, this is probably the best method I’ve tried so far. It’s also relatively inexpensive compared to hiring a professional infestation control company. Not to mention, it actually works!

Since I’m now a big fan of moth traps, I’ve decided to experiment with different products and see if there’s a better performer. I still use Dr. Killigan’s moth traps and consider them my top pick, but I have some great alternatives you can also try. 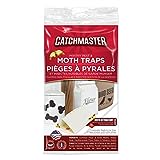 Catchmaster’s pantry moth traps are another attractive option for your pantry moth infestation.

They come in packs of 2 and are a little more expensive than Dr. Killigan’s, which comes in packs of 6. However, customers who bought both frequently reported that Catchmaster’s traps were superior, overall. They attributed this to a better formula that does a better job at attracting the male moths.

In my experience, I didn’t notice any difference between the two. They work exactly the same way, so I had to go with the cheaper option. 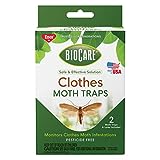 BioCare clothes moth traps also work very similarly to Dr. Killigan’s, but I do prefer BioCare’s traps. Moth traps, in general, could be left for up to 90 days and still work. I noticed that by the end of my five-week testing phase, some of my Dr. Killigan’s traps didn’t attract moths anymore, and had to be replaced.

Buyers who tried BioCare’s traps also say the pheromones are spread over greater distances. One user said that one trap was capable of covering an entire room, and would only be replaced once they’re completely saturated with moths.

They’re considered one of the least expensive traps available, but still don’t beat Dr. Killigan’s amazing value for the 6 packs.

If you’ve followed this article closely, you now know everything about Dr. Killigan’s moth traps.

Even if you choose another brand for your moth infestation, you can’t go wrong with any of our recommended picks. They work using the same technique and produce comparable results.